Hello, My name is Brian Storm(Hiroya Watanabe)and I belong to the Sales team in HDE.

Today I would like to introduce my favorite sports called Touch Football. 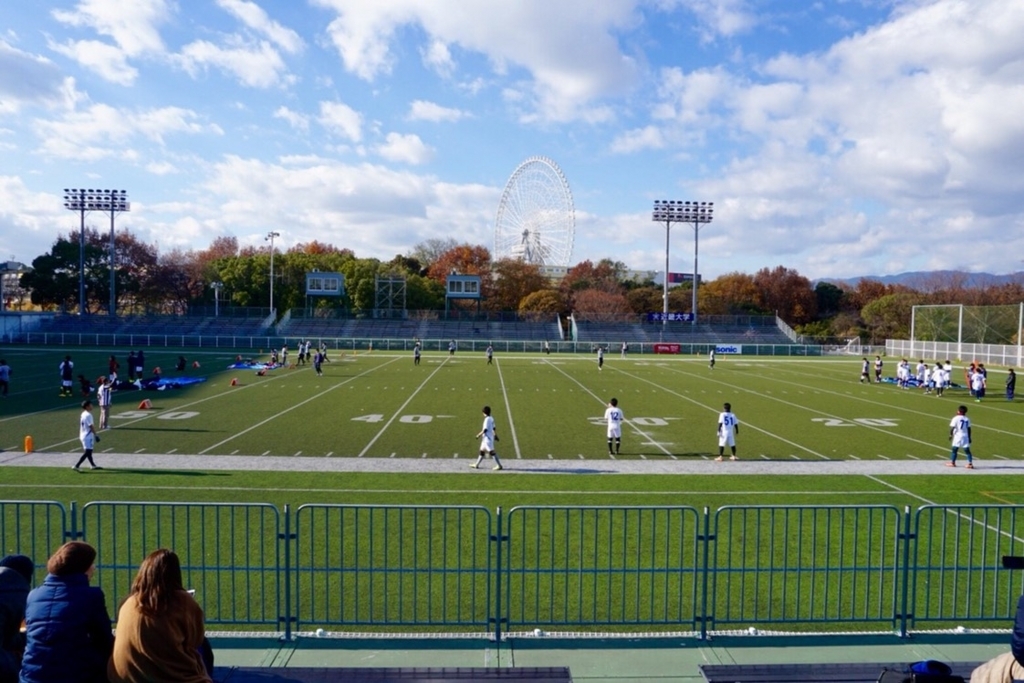 Perhaps, few people might have heard about this sports.

Outside Japan, there are some similar sports such as Tag rugby, Flag football, however, each rule is slightly different so for today I would like to introduce basic rules and fun part regarding Touch football.

Touch football may be easy to understand if you think of it as a tag game using a ball.

・Quarter Back（QB）: Game maker and who throws the ball to WR(mainly).

・Wide Recevier（WR）: Who received the ball from QB.

・Center（C）: Who snaps the ball to start the offensive attack. 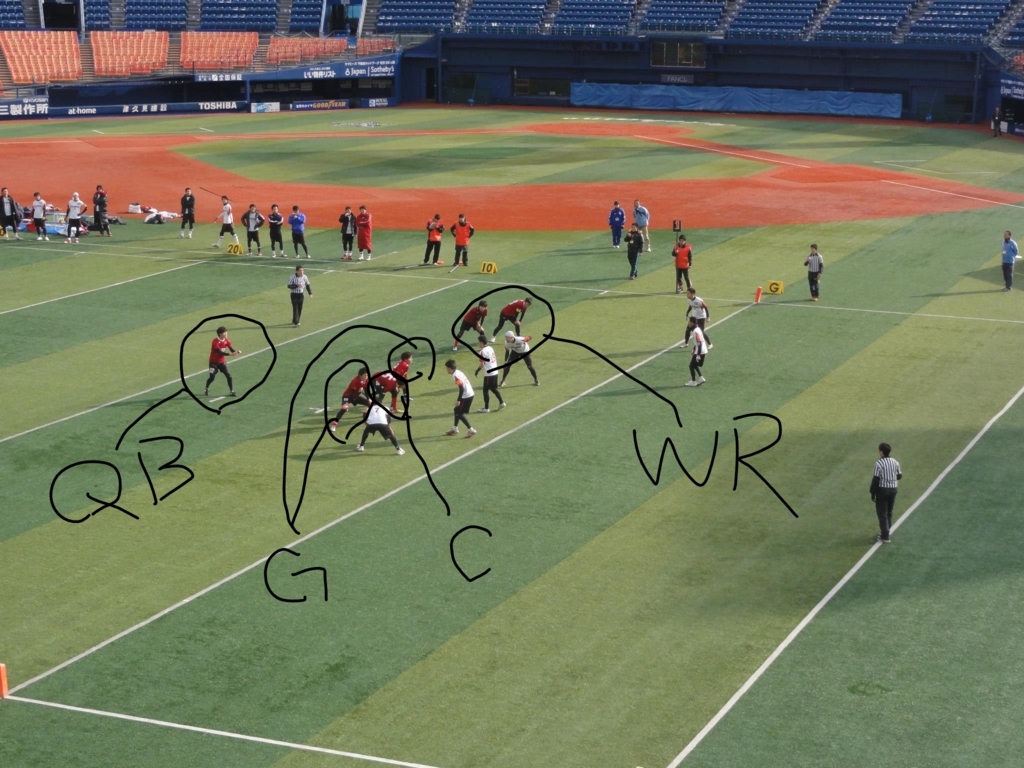 ・Defencive Tackle(DT Who tries to touch QB in order to prevent the throw.

・Line Backer(LB Who covers the middle area of the field(mainly).

・Corner Back(CB Who cares about the WR and try to prevent the advance from Offence team. 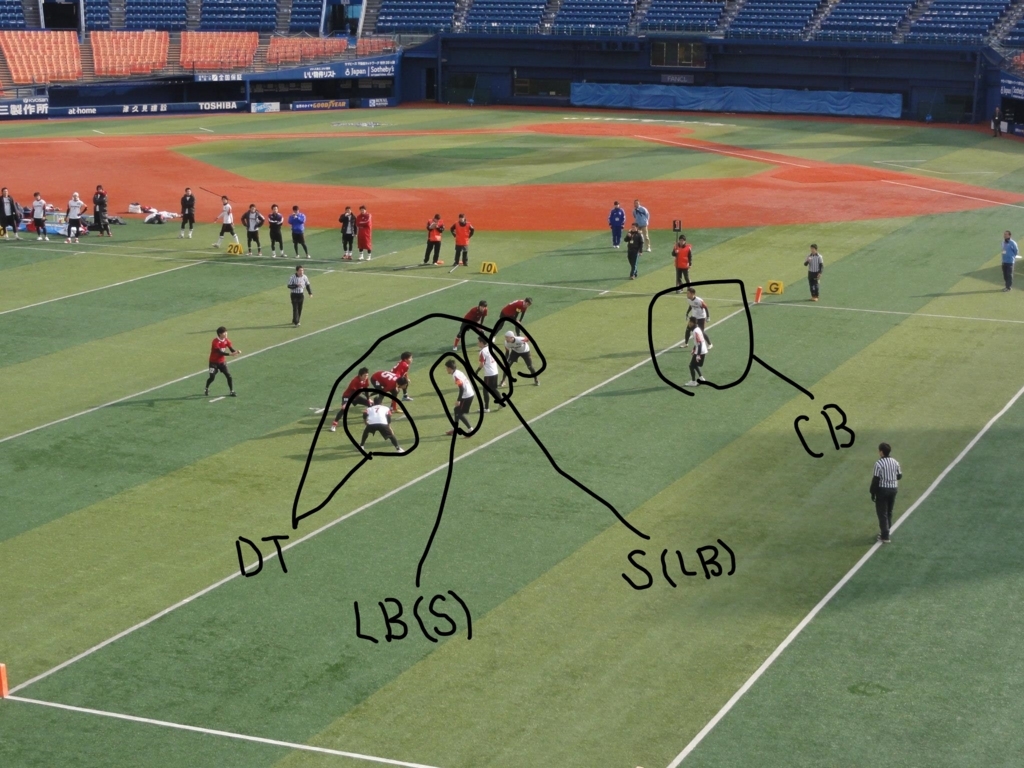 The offensive team tries to get as much "yardage" as it can to try and move closer to the opponent's end zone. Each time the offense gets the ball, it has four downs, or chances, in which to gain 10 yards. If the offensive team successfully moves the ball 10 or more yards, it earns a first and another set of four downs. If the offense fails to gain 10 yards, it loses possession of the ball.

If offense team touch down, they will get 6 points. 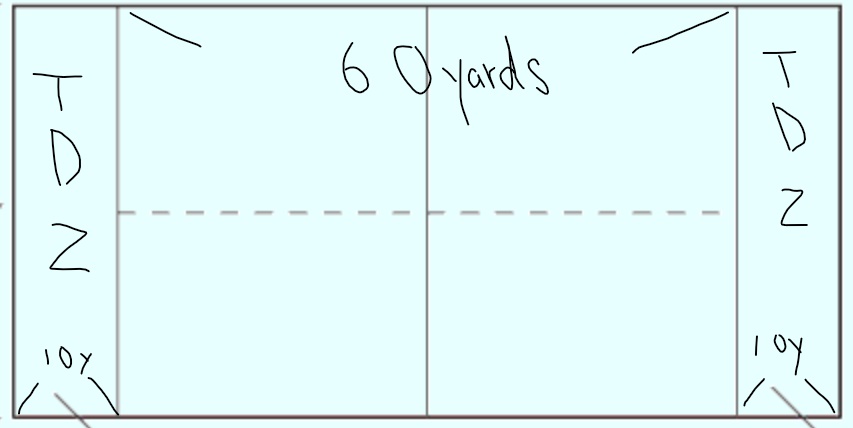 The defense tries to prevent the offense not only from scoring but also from gaining the 10 yards needed for a first down. If the offense reaches fourth down, it usually punts the ball (kicks it away). This forces the other team to begin its drive further down the field. 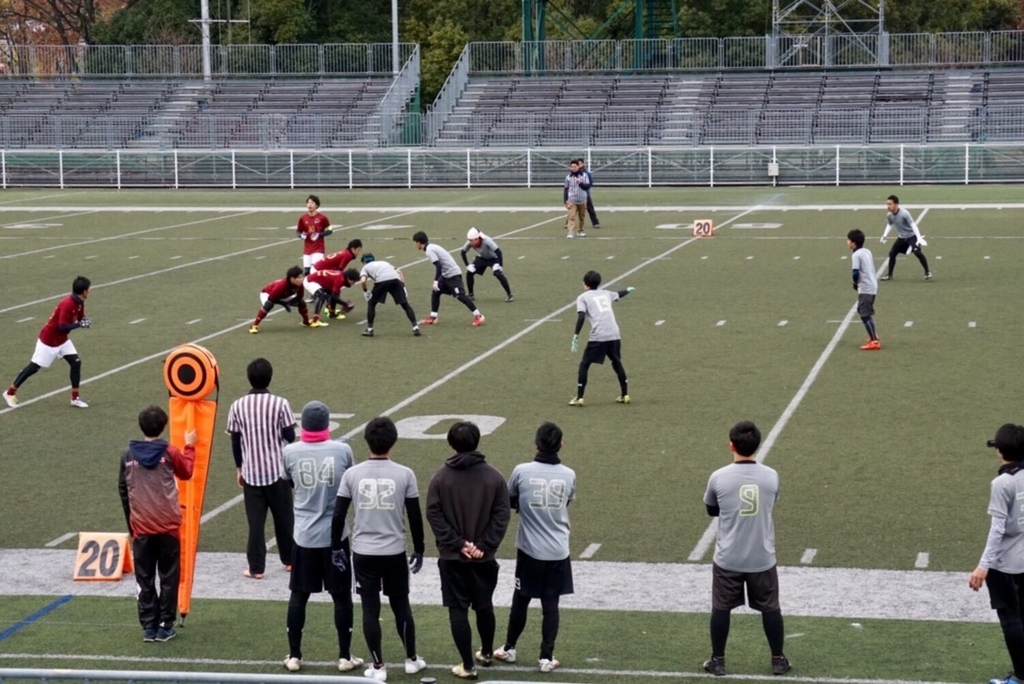 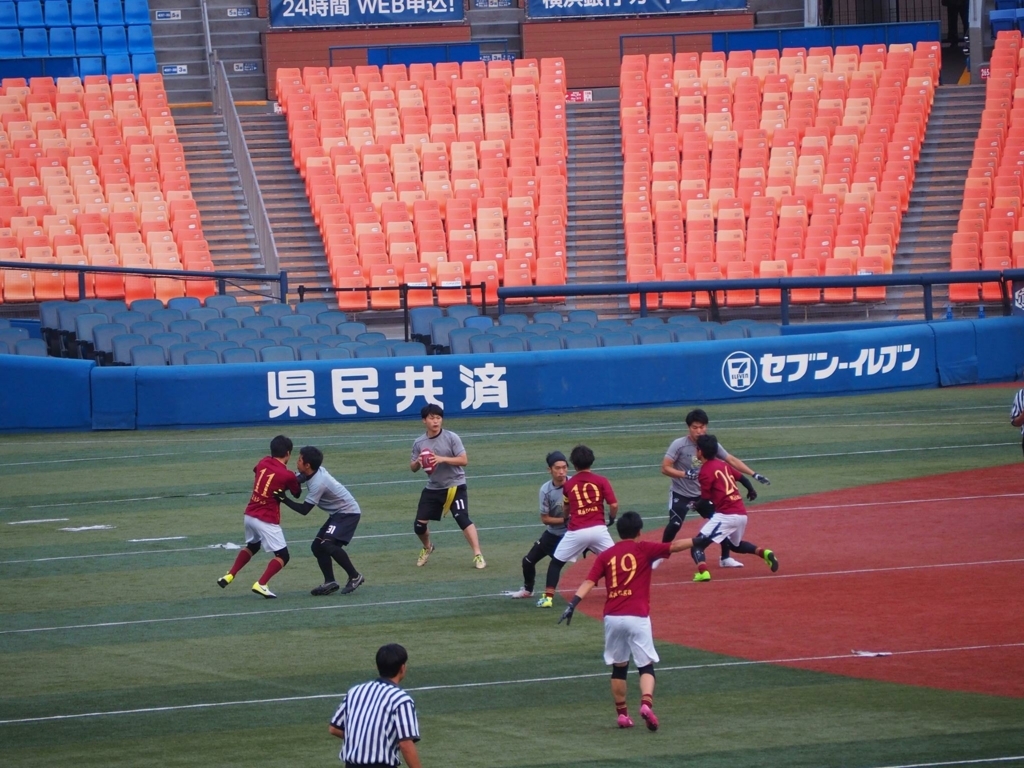 Both offense team and defense team, each position has their own role and if someone breaks the rule or ignore the strategy from the QB, the whole movement will collapse and will not gonna work. This shows the importance of each position`s responsibility.

This mind will also become important in my daily work. The team has a goal and aiming the same thing as a team. We have to think about each other, understand the objective of our strategy. There is no one who is not responsible for their every role.

Touch football`s basic idea comes from American football, however, American football is way dangerous to play as a hobby and too risky that might effects to your main job due to a possibility of injury.

On the other hand, for touch football, you still could enjoy the basic strategic part of American football but much safer.  In addition, you will have enough chance to move your body but not too much so it will not effects a lot your daily work.

Touchfoot ball is a great sport to play as a hobby but at the same time, there are many aspects which you can learn and apply to your day job or to your life.

We will have the big match in July 2018 at YOKOHAMA STADIUM.

Come see me if you have any interest!!!! 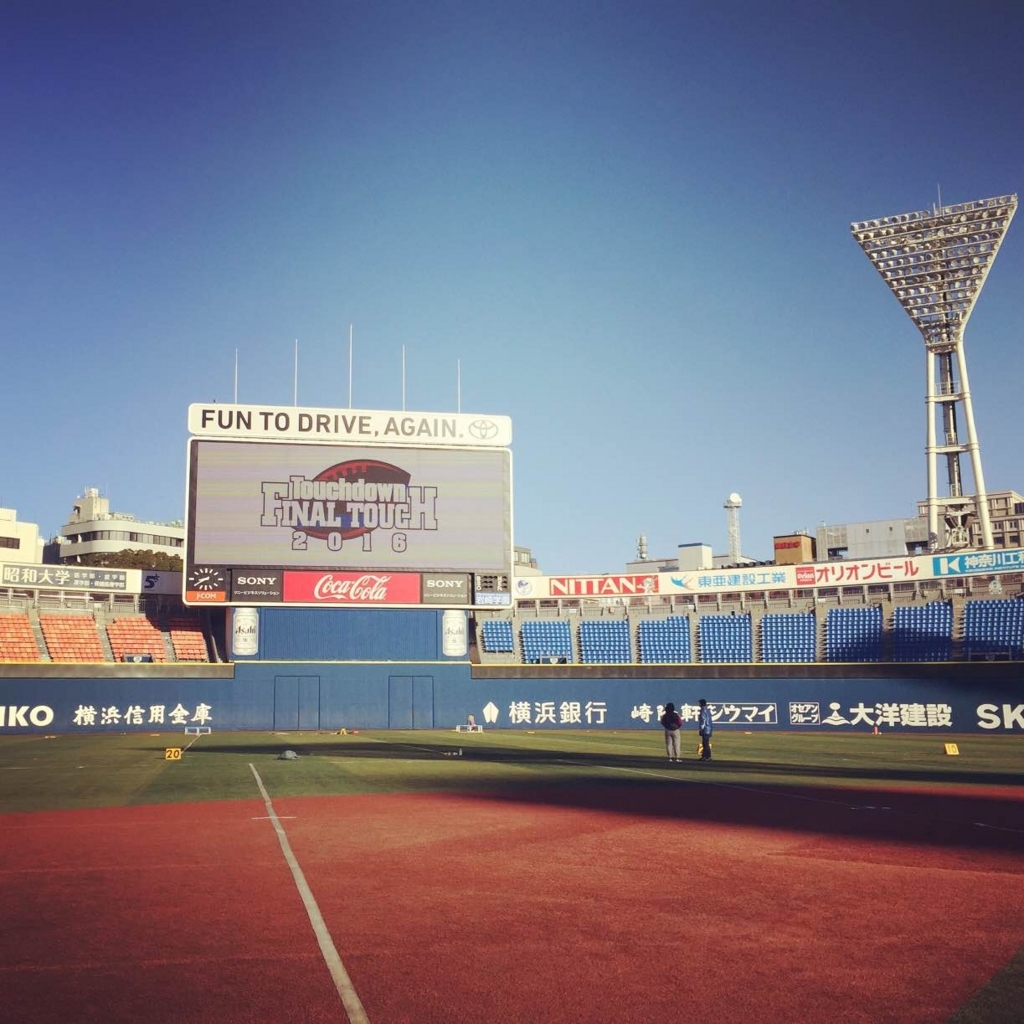 Hi, I'm Yoshiki, Executive Vice President and in charge of sales and marketing in HDE. Today, I'd like to let you know special investment plan in this blog!

Are you interested in investing? Have you ever invested anything? What did you invest, Stock, Real Estate, Commodity, Bit Coin, or studying English??

Although there are so many investments in the market, I know the best way to invest!

It’s easy, all you have to do is playing baseball as often as possible!

Those who believe shall be saved! Let me introduce super heroes as below,

Mie prefecture belongs to Tokai region, and it is located in the south of Nagoya.

On the map, Mie prefecture looks like the katakana letter "ト".

Its population is 1.8 million. Since Tokyo Dome can accommodate 55,000 people,

it only takes about 32 Tokyo Domes to hold every resident of Mie prefecture.

Mie has many popular spots, but it is not well known that they are located in Mie.

This time, I will introduce seven Japanese No.1 titles of Mie, so I hope you will be a fan of Mie. 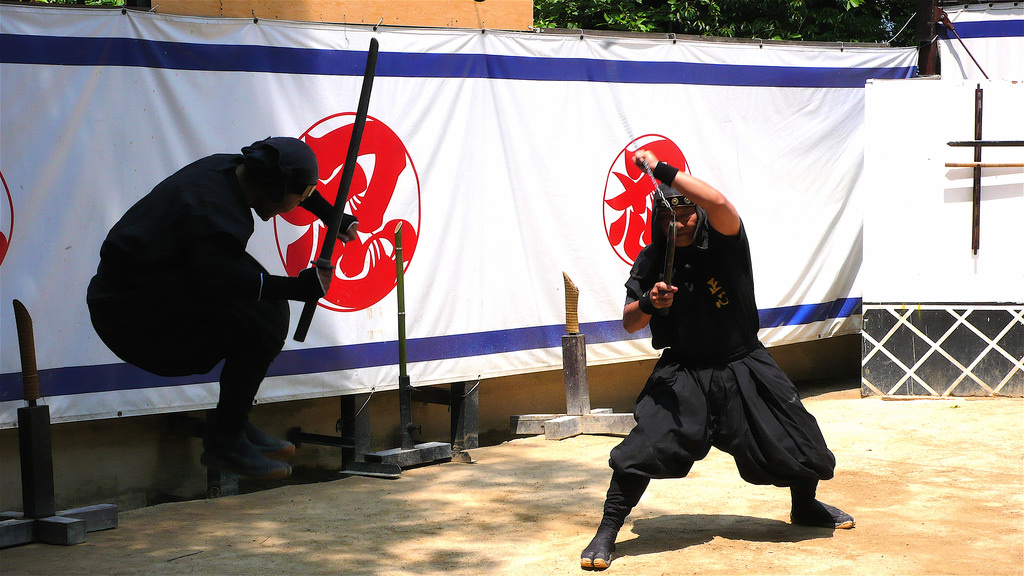 Iga-ryū (伊賀流, "the Iga School") is a most famous school of ninjutsu in Japan.

Hattori Hanzo, the most famous Ninja, was also Iga-ryū.

In Iga, there is still a real Ninja Yashiki and there is a real ninja.

If you go to Iga, you can see a powerful ninja show. 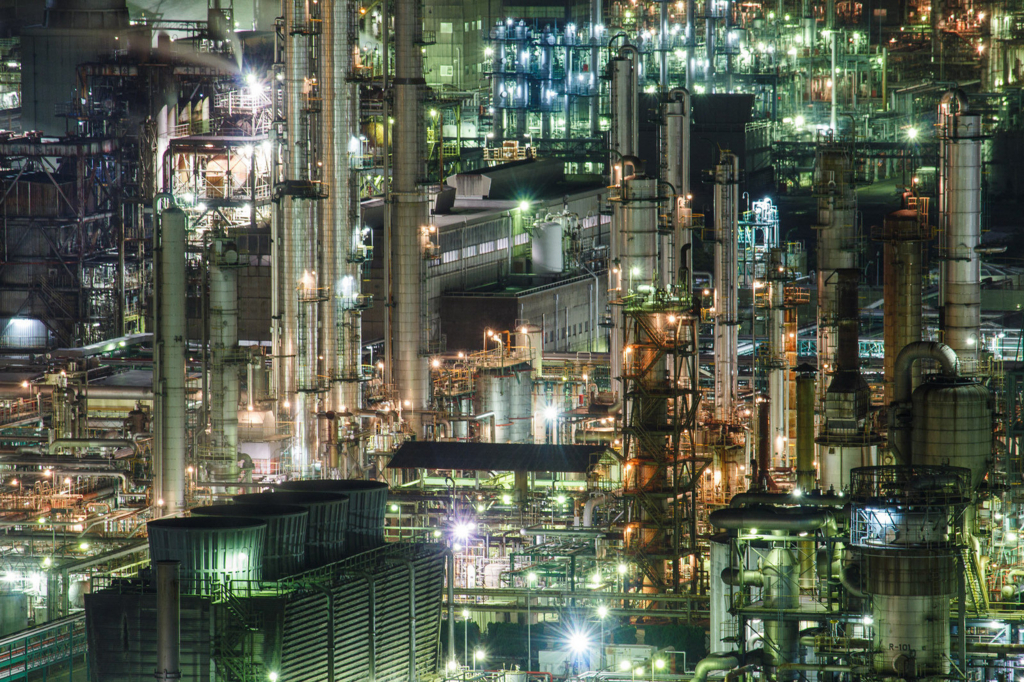 It is one of the leading industrial regions in Japan.

It was famous for the pollution-caused disease "Yokkaichi asthma", but recently it is famous for its beautiful view at night.

People often say it is the most beautiful view in all industrial complex at night. 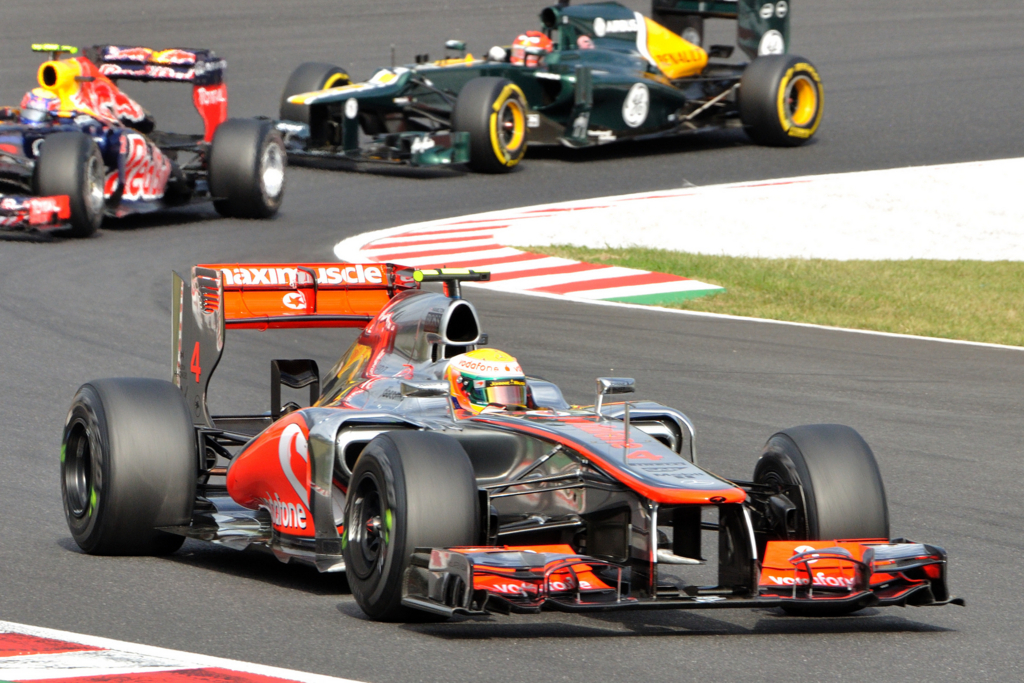 The Suzuka Circuit is the most famous motorsport race track in Japan.

People often say that it is the best race track in the world.

At this place, Formula One's Japan Grand Prix is held. 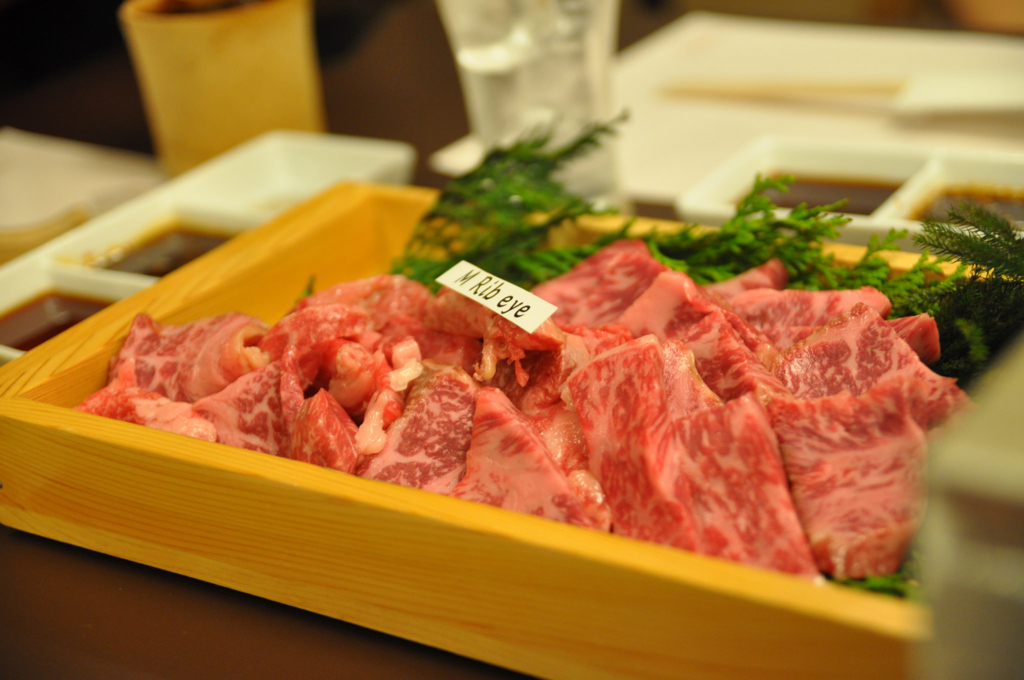 When you came to Matsusaka, please drop by Wadakin(和田金), the most famous Matsusaka beef restaurant.

By the way, Matsusaka is my birthplace and the birthplace of the Mitsui conglomerate(Zaibatsu). 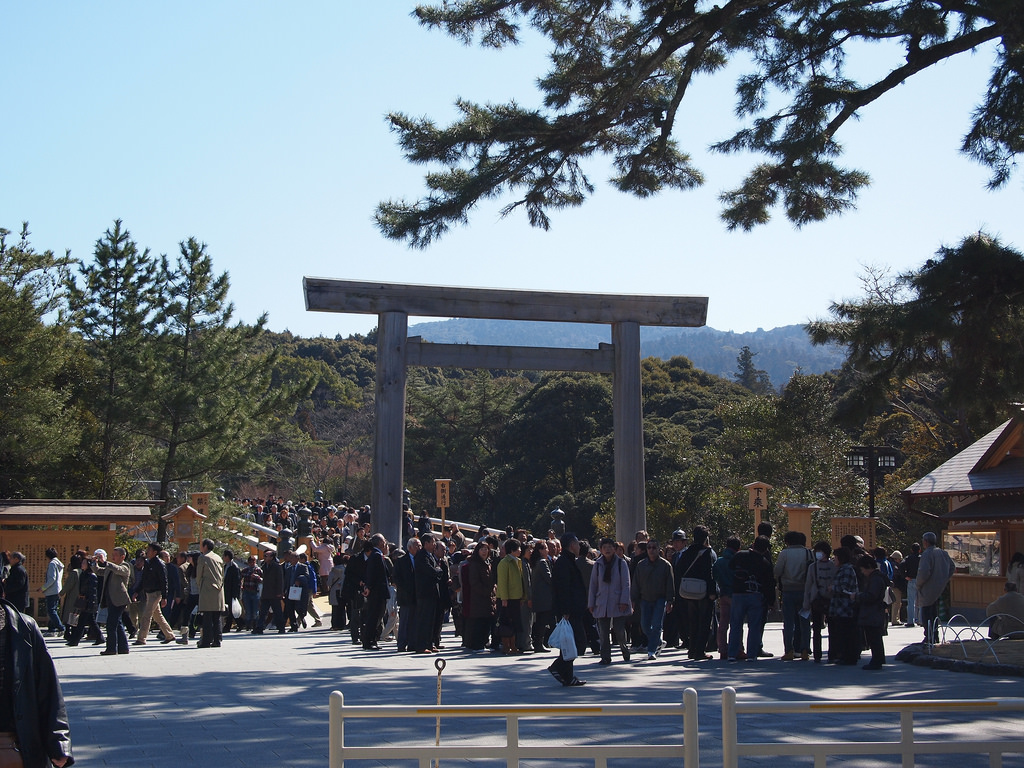 Ise is Japan’s most sacred shrine.

And it is not a single shrine.

A complex of 125 shrines is collectively called Ise Jinguu.

Its area is roughly the same size as Paris.

It is said that it is the best spiritual site in Japan.

Amaterasu-ōmikami, the origin of the imperial family, is enshrined. 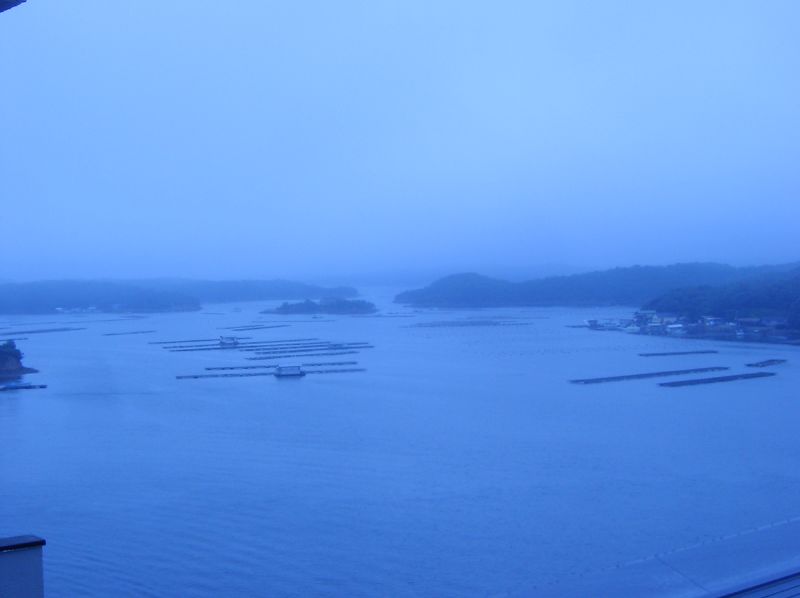 Ise-Shima is known as a city that has a lot of "Ama".

"Ama" is a professional woman diver who dives without breathing/diving equipment.

They dive to collect kinds of seafood, pearls or etc. 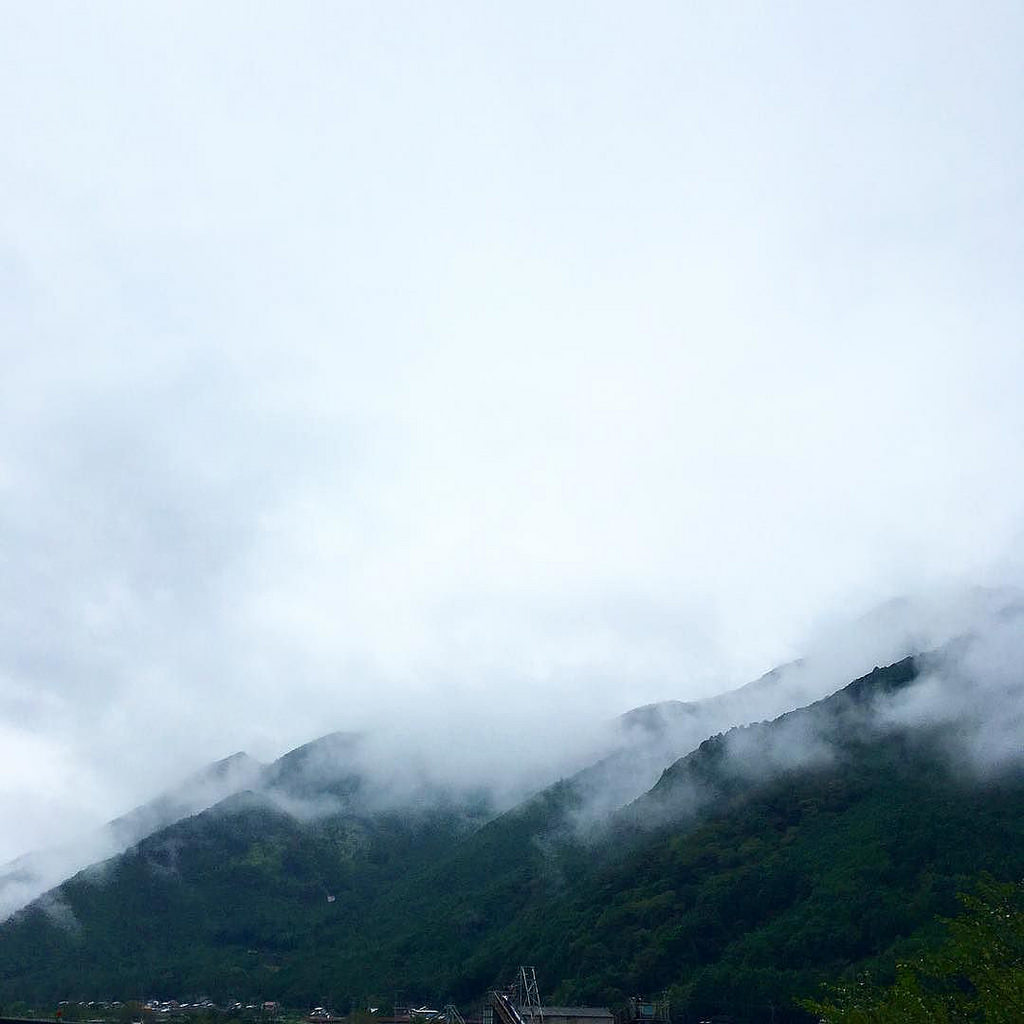 It is the rainiest town in Japan.

The average annual amount of rainfall of Tokyo is 1528.8 mm,

but Owase has a record of 806 mm rainfall in one day.

Finally, I introduce the world heritage in Mie. 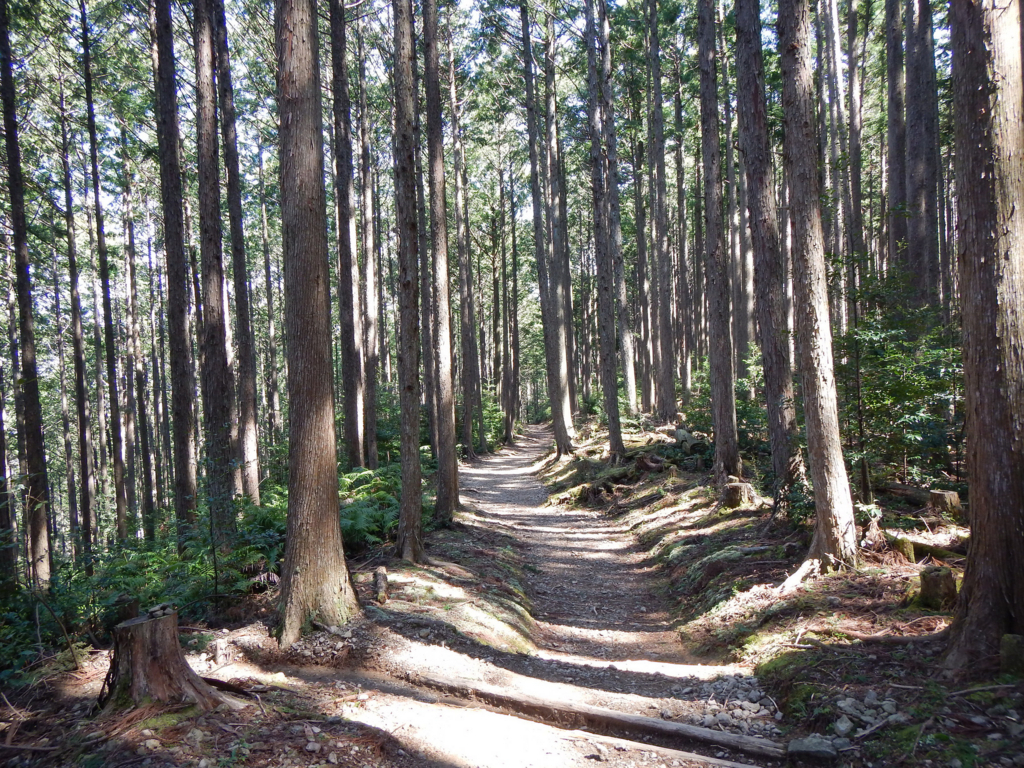 Kumano Kodō is a pilgrimage road leading to Kumano Sanzan.

Kumano Sanzan has been worshiped since about 2000 years ago. 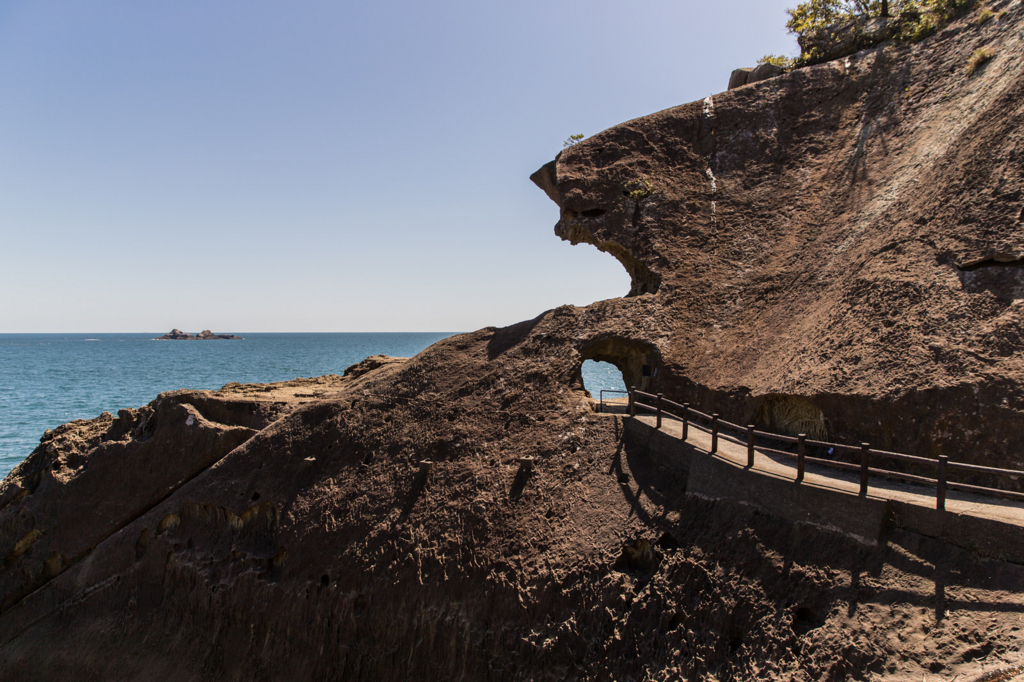 Onigajyō is a scenic spot, it is made by land uplift and angry waves of Kumano Sea.

When you come to Nagoya or Osaka, please extend your visit to Mie.