Hi, I'm Bumi from HDE's Cloud Product Development Division. Some of you may remember my post in last year's Advent Calendar. This year, I will write about something more or less related.

When hearing the word "cipher", probably some of us will remember something related to cryptography. Well, I hate to disappoint you, but this time the cipher I will discuss about is not related to anything about electronic security. However, the general meaning still sticks, which is something like "putting something into code". The something here is music, and the code here is the numbered musical notation, or "cipher notation", as some call it.

I have been working on an Angklung song arrangement for some time and I figured I could explain the difference between the notation generally used for angklung and the usual musical notation, which is quite different in shape but basically are just two different ways to express the same thing.

The picture above is an example of the usual musical notation we know. I refer to it as "western musical notation", because this kind of notation is generally used in the western world, as opposed to traditional asian music. Every note is described as a shape drawn on a collection of lines, called the staff. The length of the note is described by the shape of the note. The pitch of the note is described by the position of the "shape" on the staff. There are also "clefs" on the left side of the staff which basically tell us where the pitch of the lines is relative to the whole range of sounds we can make. 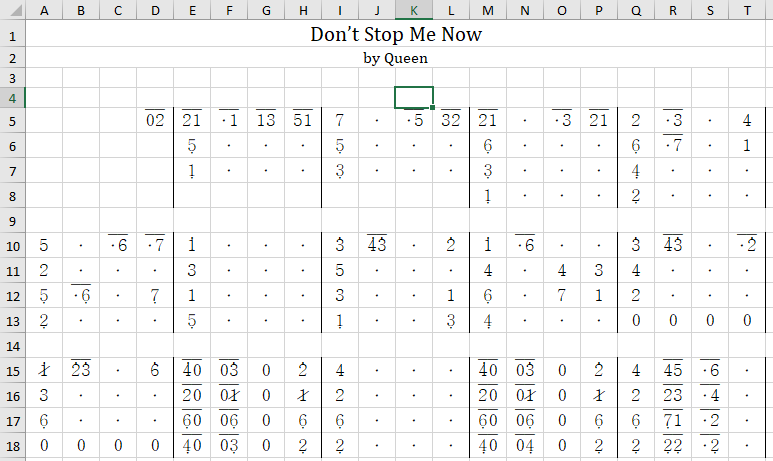 The picture above is an example of cipher notation, written in a popular spreadsheet software. Although it looks completely different, the two kinds of notations describe the same thing (not in this particular example though, the two songs are different).

What I mean by the same thing, is that in here notes are represented as numbers rather than shapes. The numbers, from 1 to 7, represent the seven-note scale of the song (diatonic scale). They are often read as do-re-mi-fa-sol-la-si(ti), as you are probably familiar with those words. Dots above the numbers represent higher pitch, and dots below the numbers represent lower pitch. Numbers with "strikethrough" lines indicate flats or sharps.

The rows do not represent pitch, but actually are different notes played on the same "time". The direction of reading is similar, left to right to indicate the passage of time. In here, the duration of notes is indicated by dots and lines. Dots after the note means the note is played longer, while the lines above the notes indicate the note is divided into sub-rhythms.

From one notation to the other

So, is there a way to convert from one musical notation to the other? I have interest in this question since it is very useful for me. I usually make arrangements by composing them with a scorewriter software, which requires me to write it in western notation. By using a scorewriter software, I can listen to the computer-generated music as if it were played by an actual angklung orchestra (with the power of virtual instruments), and make edits to the music as needed.

After that, I have to give it to the angklung players to rehearse, and they need to read it in cipher notation. So, in my free time I wrote a simple computer script which reads music from the scorewriter software in MusicXML format, and converts it to cipher notation to be read in the "popular spreadsheet software" (you may have guessed what it is by now) which is generally used for reading and writing cipher notation.

You may wonder, why invent a completely different musical notation system if there is another more popular one ready? Well, the answer is that the needs of traditional asian instruments differ from western instruments. Western instruments tend to be played individually (one violin is played by one person), whereas this particular instument, angklung, is played together (the "angklung" is played by many people and you can't play it alone).

Another common argument is that the cipher notation is easier to read, and thus will attract more people to play angklung. Moreover, it will fit with one of the core principles of angklung, which is Mudah, or easy to understand. By using this kind of notation it will lower the so-called "barrier of entry" into playing angklung.

There may be different arguments related to why these notations are used, but the main point is different notations cater to different needs of different instruments. The cipher notation is actually really easy to use and read once you understand the situation it is used in.

So, how about we play angklung together some time? It is totally fun to experience! :)